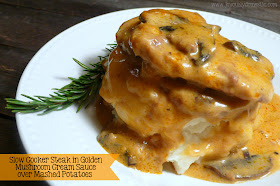 My mother has been making cubed steak in cream of mushroom soup gravy in the slow cooker ever since I can remember.  It's pretty much the most-requested "birthday meal" within our family.

For my version, I use two different kinds of mushroom soup and add in some fresh mushrooms.  I've made this with cubed steak, thin slices of eye of round or even thin-cut, boneless pork chops.  I've, also, used this sauce to make meatballs in the slow cooker many times.

This is the perfect Sunday dinner.  We love serving the meat and gravy over mashed potatoes.  And, a big loaf of homemade bread is a must ... perfect for sopping up the velvety, rich gravy on your plate.

This will serve 4 - 6 people ... depending on how many pieces of steak you use.

(If the meat you've purchased isn't already tenderized, you can choose to do this at home using a meat tenderizer.  It isn't required, but it is customary to do so for this recipe.)

Melt 1 tablespoon butter in a large, heavy-bottomed skillet set to medium-high heat.  Place half (usually 4 - 5 pieces) of steak into the baggie of flour.  Seal and shake to coat steak.  Shake off excess flour and brown both sides of steak in the skillet.  Transfer to slow cooker.  Add the other 1 tablespoon of butter to the skillet.  Allow to melt, then repeat the browning process with the remaining steak.

Once all steaks are browned, return skillet to stove top and add in both cans of soup.  Whisk to combine, then add in milk.  Whisk to incorporate and bring to a gentle simmer.  Be sure to scrape up any brown bits remaining in the bottom of the pan from browning steaks.  Season with salt and pepper to taste.  Stir in the sliced mushrooms.  Pour sauce into slow cooker to coat steaks.  Be sure some of the gravy gets between each piece of meat and on the bottom of the insert.

Cover and cook on low for 7 - 8 hours.  Serve over mashed potatoes or even cooked rice.

NOTE:  For those who prefer not to use canned soups, I do have a recipe on the blog for Homemade Cream of Mushroom Soup. This can be a great substitute in place of one can of soup.  (You may not need to add in as much milk to the sauce as called for in this recipe.)  And, know that the sauce in this steak recipe would not have the "golden" aspect due to not using the canned golden mushroom soup.