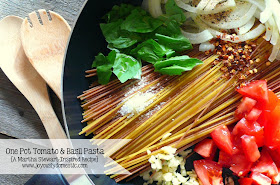 I was amazed at how this dish turned out for being so simple and basic to make.  The only liquid that is added is straight H20, so I was concerned that there wouldn't be much flavor or a good consistency to the "sauce" that is created as this cooks.  But, something amazing happens.  Just the few ingredients that are added bring great flavor to the dish while the starches in the pasta release into the water so that it thickens almost like cream was added.

I came across a Martha Stewart recipe for One Pot Pasta (video of recipe preparation included) that totally intrigued me.  I did alter a couple of things when making it myself, but I pretty much kept with the basic method she used.  Next time, however, I will use a little less crushed red pepper flakes.  Her recipe called for a half of a teaspoon, but I got ambitious and used probably around 2 - 3 teaspoons!  Yikes - it was pretty darn spicy, but still a fabulous dish!

NOTE:  I used a combination of regular spaghetti noodles and whole wheat noodles.  I like the healthful benefits of adding the whole wheat pasta, but it did make the sauce a weird brownish color at the end of cooking.  I would recommend not using a brown-colored pasta if you would like the sauce that is created to stay a creamy, white color..

Combine all ingredients except Parmesan cheese in a large straight-sided skillet.  Bring to a boil over high heat. Reduce heat to medium, but continue to maintain a boil.  Boil - stirring and tossing pasta with other ingredients almost consistently - until pasta is al dente and water has nearly evaporated.  This should take 9 - 12 minutes.

Check for seasonings.  Adjust salt and pepper as needed.  Serve with additional fresh basil and lots of Parmesan cheese.

Additional Options:  I am thinking some grilled shrimp or chicken would be fabulous added in at the end of the cooking time or served atop the pasta.  Also, fresh spinach would be great in this and maybe a squeeze of fresh lemon at the end.