I tried posole at an amazing Mexican restaurant while living in Nashville, Tennessee years ago. I've always wanted to make it at home, but had never attempted it until this week. Posole (or pozole) is a soup or stew {originating in Mexico} traditionally made with hominy as a main ingredient. The base of the soup is a combination of roasted poblano peppers, tomatillos and chicken stock {vegetable stock can be used to make this a vegetarian soup}.  The addition of roasted corn, hominy, onions, garlic and cumin results in a flavorful, yet delicate soup that is best topped with avocado, cilantro, sliced radishes and a good squeeze of lime. 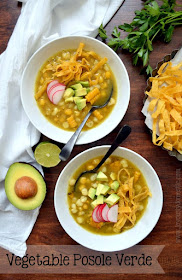 This is an incredibly healthful and good-for-you soup. It is light, yet abundant in flavor. {It does have a hint of spice, but it isn't overpowering.}

NOTE:  Don't be intimidated by the various steps in this recipe. They are all simple and easy.  You'll, basically, be roasting the veggies first, blending them up and combining everything in one pot at the end. 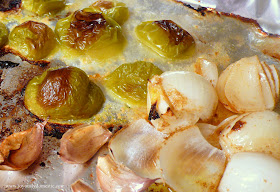 Meanwhile, rub corn with the remaining 1/2 tablespoon of olive oil. Roast corn and poblano peppers until charred on either a grill pan or over an open flame on a gas stove. Peppers should be quite blistered. 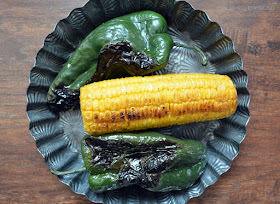 Once cooled, peel off skin {the edge of a sharp knife works well for this}. Remove seeds and stems, then coarsely chop. Set aside.

Cut corn from cob. Set aside.

Remove and discard peels from garlic.

Combine tomatillos, onions, garlic, chopped peppers, a small handful of cilantro, lime juice and 1/2 cup of the stock in a blender or food processor. Blend until completely smooth. 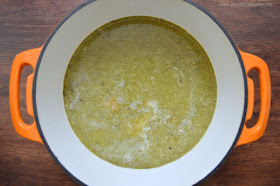 Add in drained hominy and corn.

Simmer over medium heat for 20 - 30 minutes to combine flavors. Taste. Season with salt as needed. 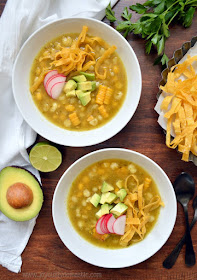 NOTE: Crispy tortilla strips can be made by cutting 8 - 10 small soft corn tortillas into thin strips, then frying or baking them. To fry, preheat vegetable or canola oil to 350 degrees in a large pot. Carefully drop in tortilla strips, stir and fry until crisp. Drain strips on paper towel-lined plate and sprinkle immediately with salt. To bake, preheat oven to 350 degrees. Coat strips with non-stick spray and sprinkle with salt. Bake for about ten minutes - tossing halfway through baking - or until just crisp.

09/10-17: Updated some photos and made clarifications to recipe/post.