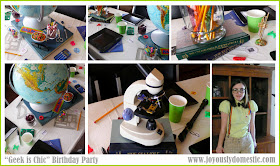 I sometimes bring you party ideas here on Joyously Domestic ... in the midst of all of the recipes and food ideas.  I wanted to share with you the party I just hosted for my daughter's fourteenth birthday.  The theme was inspired by her purchase of "nerd" glasses awhile back.  She loves them.  She is, also, one very smart girl and thrives at school.  She blows me out of the water when it comes to most school subjects.  She takes advanced classes and has pretty much always been a straight-A student.  She wanted to play off of that by having a "Geek is Chic" party.

While the words nerd and geek can sometimes evoke a certain negative and stereotypical connotation, she revels in the fact that she's sometimes labeled as such.  We decided to put a positive spin on it and go hog-wild with the theme.

First, let me show you the invitation that I created using Microsoft Publisher.  We printed it on heavy card stock.  She is all about her big bulletin board in her bedroom, so I took a lot of the ideas for this from what she has pinned on her board. 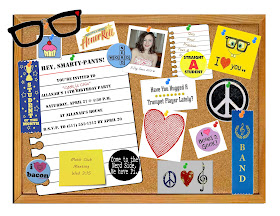 We had a great deal of the decoration stuff already at home.  We just dove into the kids' school and art supplies for the most part.  We did pick up some extra rulers, pencils, erasers and such at our local dollar store.  I used clear, glass containers and vases to showcase some of the school supplies across the party table.  I used some books stacked up to give the table some height.  We utilized our globe and microscope for the party table, too. 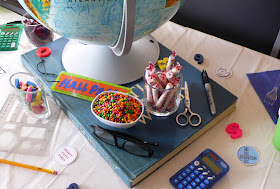 I bought "Smarties" and "Nerds" candies to set out on the table.  We put a small container of Scrabble letters out.  And, I took some of my five-year old's magnetic fridge letters and numbers to scatter across the table, too.  Since my daughter and many of her friends are in the school band, we set out a mini trumpet and her recorder. 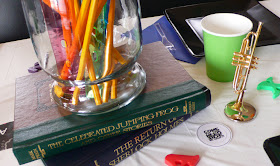 In keeping with the "smarty-pants" theme, we put on a mock "quiz bowl" for the eighth grade guests - as their party game.  Allanah has been involved with her school's quiz bowl team for several years ... as have many of her friends who attended the party.  So, I searched online and found some sample middle school quiz bowl questions.  They divided up into teams. An adult family member was the "moderator."  I had participation certificates printed up to pass out at the conclusion of the quiz bowl game and the winning team got to be first in line for cake. :) 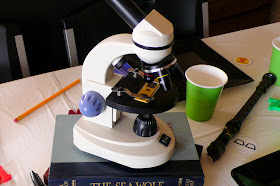 Allanah wore her nerd glasses along with a smarty-pants appropriate outfit (complete with suspenders).  We found the perfect shirt and pants at a local thrift store.  We couldn't track down an actual bow tie, so she used a bow tie hair clip. She spread the word at school that her guests were welcome to dress according to the theme, as well.  It was a wonderful day celebrating the birthday of my beautiful and talented daughter. 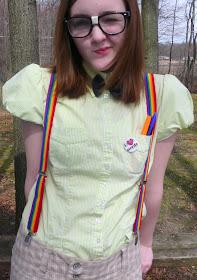