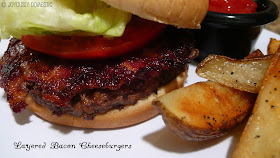 I have to admit ... I did not come up with this entirely on my own. I believe I saw a version of this on a Food Network show awhile back, but they used bleu cheese instead of cheddar and had some different toppings. Although I adore bleu cheese, the kids and hubby do not. So, I kinda tweaked this burger and made it my own. The beauty of this burger is that you actually have the cheese and bacon "embedded" into the burger prior to cooking.
Start by dividing ground beef into equal portions (I used just under 2 pounds and it yielded 7 burgers). Because this will have the fat from the bacon to aid in the cooking, I use a combination of ground sirloin and ground chuck. Set aside.

Next, chop about a pound of bacon into super small pieces. It took about 1 1/2 - 2 pieces of bacon for each patty. I find that my kitchen scissors work really well for this.

Using a large round metal cutter or if you don't have one (as I do not), find a plastic bowl that you don't mind cutting. I used one of those disposable, leftovers kind of plastic container.

With sharp scissors, cut away most of the bowl leaving only a circle like you'll see in the next photo.

Begin by pressing a portion of your chopped bacon very firmly into the bottom of the ring. 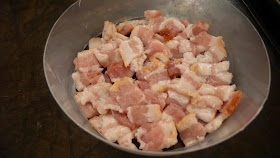 Next, sprinkle some shredded cheddar cheese onto the bacon and again, press down firmly. 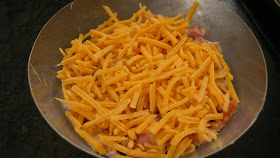 Then, do the same with your ground beef ... pressing the meat very firmly into the cheese and bacon. Salt and pepper ground beef side. 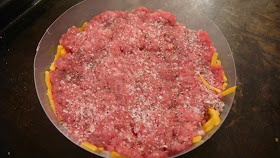 Finish putting together the rest of the patties, then place them into the fridge to set up for, at least, thirty minutes. I actually made them a few hours in advance and stored them in the fridge - covered. 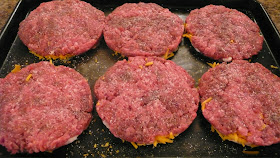 Get a non-stick pan good and screamin' hot! Remove patties from fridge and place onto pan bacon-side down. Turn heat down to medium. You do not want to burn the bacon! Flip when bacon appears super seared and crispy. Some of the cheese will "leak" out, but that makes for those yummy, crispy cheese bites! Cook to your desired doneness ... we like ours almost well done.

Meanwhile, toast buns in another pan just until the insides get a little brown.

Place patties on buns and top with your favorite burger toppings.
Share