I am a biscotti junkie. And, even though I have found some in cafes and stores that I do enjoy, I've come to really love making them at home. Besides turning out amazing every time, I love that I can play around with the add-ins when making my own batches. 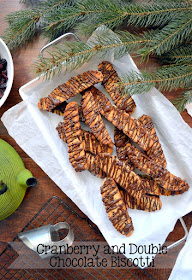 I put off attempting to make biscotti from scratch at home for many years because I thought it would be a complicated process. Not so at all. The recipe is almost the same as making like, chocolate chip cookies. {Actually, I find making biscotti a little simpler, but that's probably because I get impatient while shuttling cookie sheets in and out of the oven when making cookies.} The dough will turn out a little thicker than regular cookie dough. But, the recipe, basically, calls for the same ingredients and mixing process. From there, the dough gets formed into "logs," baked a bit, removed from the oven, sliced and baked again. That's it.

Biscotti - by the way - are sweet Italian biscuits or cookies that get double-baked and are often served up with the intention of being dunked into beverages. They are typically oblong. Due to the double-baking, the end result is a crunchy, dry baked good that keeps well for a longer period of time than traditional soft-baked cookies.

I've chosen to bring together dried cranberries and mini chocolate chips in this version. Then, I've drizzled the cooled biscotti with melted chocolate. But, you can experiment with other mix-ins if you'd like ... chopped nuts, different varieties of chocolate, various dried fruits, etc. Also, I have used almond extract in place of vanilla extract in the past ... that is, also, really good.

In a large mixing bowl, cream together butter and sugars using an electric mixer until smooth. {Scrape down sides of bowl as necessary.}

Beat in salt, baking powder, eggs and vanilla. Beat in flour - a little at a time - until well-incorporated.

Switching to a sturdy wooden spoon, stir in cranberries and chocolate chips. {Dough will be thick and hearty at this point.} 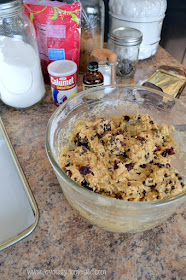 Divide dough into fourths. Form each fourth into a flat log - two to a baking sheet. Logs should be 7 - 8 inches long and about a 1/2-inch thick each. Do not allow dough logs to touch. 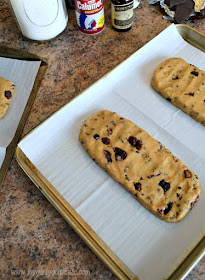 Bake in middle of oven for 25 minutes or until logs are puffed and just firm enough for slicing. {Do not allow much darkening.}

Remove from oven. Do not shut off oven. 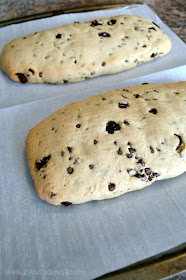 Allow logs to cool on baking sheets for about 10 minutes.

Working one at a time, transfer logs to a cutting board. Using a serrated knife, carefully cut into 3/4-inch slices. Lay slices out on the baking sheets - cut side up. {Ends may crumble or break during slicing - discard or save for "chef's snack," if desired.}

Return to oven. Bake 7 - 8 minutes, then flip all slices over and bake another 7 - 8 minutes. Biscotti should be just beginning to brown around the edges and should be pretty dry. {They will continue to dry out during cooling.}

Remove from oven. Transfer to wire racks to fully cool.

Once cooled, melt chocolate in a small bowl in the microwave for twenty seconds at a time - stirring in between each interval - until melted. Immediately drizzle chocolate over cooled cookies. 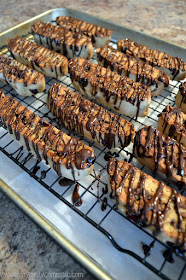 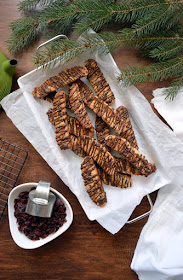 Store in airtight container for up to two weeks.


GIFT IDEA
Include individually-wrapped biscotti in Hot Cocoa or Coffee Kits for gift-giving at the holidays {or anytime}. Below I've put together Hot Cocoa Kits that include hot chocolate packets, mini marshmallows, homemade chocolate stir spoons, candy canes and biscotti. 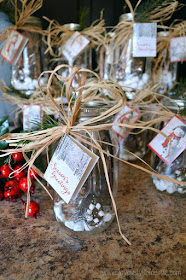