I have been eating mostly vegetarian for over a year now. I would say that I am vegetarian probably ninety percent of the time. I still use chicken stock in many of my soups. I occasionally dribble a little gravy over my mashed potatoes when I make a big Sunday dinner for the family. And, being a food blogger means that I taste all of the dishes that I make while testing recipes - meat or otherwise. But, I never really sit down and eat an actual "meat forward" meal very often. One thing I have missed terribly is traditional tacos, taco salads and burritos. That was until I started making tacos with cauliflower rice. 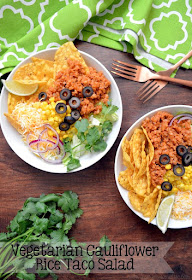 It changed my life. Seriously. I can enjoy tacos again ... tacos that actually taste as if regular seasoned ground beef is included. Like, cauliflower rice seasoned with taco seasoning is amazing, guys. And, it tastes like, well ... taco meat. I will admit I was hesitant even as it was cooked up and ready in the pan. When I tasted it, I thought that it tasted like cauliflower rice cooked up with taco seasoning. But, get it in a taco or taco salad with all of the fixings ... mind blown.

I feel like a whole new world opened up to me with this concept. Frozen cauliflower rice may scare some of you. Please don't let it. Even my ten-year old daughter who despises cooked cauliflower said that it felt as if she was eating regular taco meat. (That's huge.)

For this post, I've utilized the cauliflower rice taco "meat" in a taco salad. But, it works just as great in regular tacos or loaded burritos. When we tried it in tacos, we definitely agreed that the one notable difference between cauliflower rice versus ground beef is the lack of fat/grease. But, once sour cream and/or guacamole was added into the taco, that void was totally filled. So, I would recommend the inclusion of one or the other (or both).

FOR THE TACO-SEASONED CAULIFLOWER RICE -

Heat cauliflower rice in a large sauté pan over medium heat - stirring occasionally - until fully heated through. Add taco seasoning and water. Reduce heat to low. Stir and allow to simmer for three minutes. Remove from heat. Set aside.

Salad can be assembled as one large taco salad for sharing or in four individual bowls by dividing ingredients into four portions during assemble.

Lay down a bed of lettuce. Add remaining salad ingredients - including prepared and cooled cauliflower rice. Toss as desired or serve composed/arranged. Garnish with cilantro and lime wedges. 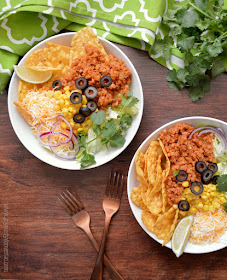