I have shared several potato soup recipes here on the blog since its start in 2012. Some were slow cooker ones. Some called for summer sweet corn off of the cob. A couple were spicy versions. Bacon and lots of cheese were the highlights of a couple. But, for this particular recipe, I've broken it down to the basics. A simple, straight-forward soup. Simple, no-fuss ingredients. Very simple, easy prep. On the table in around thirty minutes from start to finish. 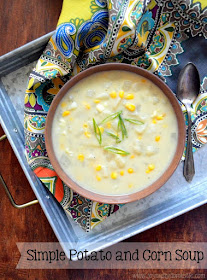 The result is a creamy soup that is loaded with chunks of potato and pops of corn kernels. This is the type of soup that you want to hunker down with on the couch on a chilly evening - a blanket atop your lap and remote in hand - and just savor each comforting, homey bite.

It's an ideal soup to make for weeknight dinners due to the ease and simplicity of the recipe. And, if you'd like to make dinnertime even easier, you can have the potatoes prepped the night before or morning of, too. Just keep the chunks submerged in cold water in a lidded bowl in the fridge, then drain before utilizing them in this recipe.

Add potatoes. Cook for about 3 - 4 minutes - stirring occasionally. Sprinkle in the flour. Stir to coat.

Cook - stirring occasionally - for about 3 minutes to cook off the raw flour taste.

Stir in milk and heavy cream. Bring soup back to gentle simmer.

Taste and add salt only if needed. Grind in additional black pepper as desired.


NOTE:  A pinch of crushed red pepper flakes can be added when stock is added for just a touch of spice, if desired.