Let's face it - most of us indulge a little too much during the holidays. Whether it's Thanksgiving, Christmas or Easter, temptation in the form of potatoes, gravy, butter, pies, rolls, cakes, candies and carbs galore hit us from every angle. So, it's often nice to have some recipes in our arsenal that are quick to whip up and ones that fall a little more into the "healthful" category to make in the days that follow (ya know, once we've devoured all of the leftovers). This soup is one such recipe. 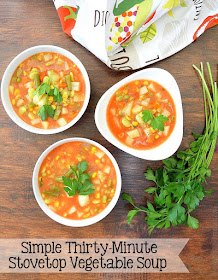 It's adapted from a Trisha Yearwood recipe that she featured awhile back on her cooking show. I was immediately drawn to it because it seemed incredibly easy to make, used just a handful of ingredients, was totally uncomplicated and wasn't a heavy, cream-based soup. Basically, some chicken broth, tomatoes, diced potatoes, garlic, onions, frozen veggies and seasoning come together on the stovetop in like, twenty-five minutes.

This soup is a great one to experiment with since the flavor profile is pretty basic. The recipe as written is awesome. But, if you'd like to play around with different herbs or seasonings, the sky really is the limit. I encourage you to maybe try it as-written, then go from there the next go-round. (I've used a slight sprinkling of Mrs. Dash's Original Blend seasoning a couple of times in this soup ... and have really come to love it that way.)

What you will find is that this is light and refreshing. Yes, as odd as it sounds, this soup is refreshing (as much as a soup can be, I suppose). It isn't heavy at all and due to the quick cooking time, the vegetables don't become mushy as often happens with longer-cooked soups.

In my house, we love this soup served with saltine crackers and a little shaved Parmesan on top just prior to serving. 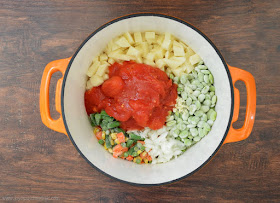 Stir in broth, salt, pepper and red pepper flakes. Bring to a boil, reduce heat to medium. Cook until potatoes are fork-tender, but not falling apart - about 20 to 25 minutes. Reduce heat to low, stir in cream-style corn. Cook one minute. Turn off heat. Adjust seasoning as needed. Allow soup to rest for five minutes. Serve.

* Canned diced or whole tomatoes can be used. If using whole, just break them up a bit with a spoon when they are added to the soup pot.