This fall-inspired dessert is somewhat of a cross between traditional bread pudding and apple pie. This is an incredibly simple recipe to make and one that requires mostly pantry ingredients that many of us already keep on hand. I've made an abundance of bread pudding-style desserts throughout the years, but this one was declared "the best" by my husband and kids during recipe testing. And, I think I have to agree! 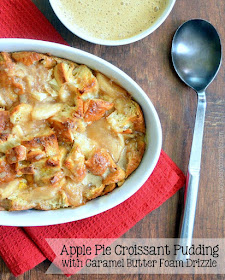 Let me start by saying that subbing in croissants for run-of-the-mill bread when making bread pudding already is a game changer. The inclusion of croissants takes bread pudding to a completely different level ... a really, really good level. So, this recipe is already elevated drastically because of those flaky, buttery croissants.

I must mention that one of the things that turns me off from some bread puddings is that sometimes it tastes as if I'm eating bread baked up in sweetened scrambled eggs. (Anyone else?) Some recipes just simply call for way too many eggs. Here, you'll find that there is only one whole egg and one egg yolk in the custard, which results in no over-the-top egg-y taste or texture.

Cinnamon, vanilla and nutmeg come together in the custard base to flavor up this dessert. (And, your house will smell awesome while this bakes, too.) Next, I break open a can of apple pie filling to dollop atop the dessert to really drive home the autumnal flavor.

The highlight of this dessert has to be the sauce, however. I'm telling you, guys ... I don't even know how to describe it in words. It's so incredibly different than any other dessert sauce I've ever made, but I think it just might be the best. Something magical happens due to the addition of baking soda in the sauce. It gets all frothy and foamy. It's so insane in theory, yet it is definitely insanely amazing in taste. I beg of you ... do not skip the Caramel Foam Drizzle sauce.
1 comment:
Share


Salads are a favorite of mine any time of the year. I especially love coming up with salads that highlight seasonal ingredients. For example, fresh sweet corn and juicy, red tomatoes often turn up in my summer salad creations. Radishes, scallions and fresh-from-the-garden peas usually make appearances in salads that I enjoy throughout the spring. For this salad, I'm showcasing sweet potatoes - one of my favorite ingredients of all time. Roasting them enhances their flavor and brings out their natural sweetness. They really shine here and lend themselves well to my hearty, fall-inspired Roasted Sweet Potato Salad with Apple Cider Vinaigrette. 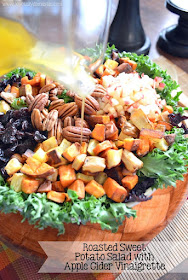 I've taken just a handful of autumnal ingredients and turned them into a fresh, yet hearty salad that is great on its own or paired with pork chops for dinner. This salad, also, holds up well, so it's perfect to take along to work if there are any leftovers.

I've used both white and traditional sweet potatoes in this salad, but feel free to use whatever variety you can find or prefer.

I like serving the roasted sweet potatoes and their accompanying ingredients atop a bed of arugula or other dark, leafy greens. But, you can totally omit the greens, if desired, and serve some cooked quinoa, wild rice or other grain as the base instead.
No comments:
Share

I have to admit that Indian cuisine is pretty new to me. I have tried it while out at a few restaurants throughout the years. Some dishes impressed me more than others. One that I enjoyed in particular was Chicken Tikka Masala. I recently started testing some recipes at home for this rich, earthy Indian dish. If you're not familiar with it, Chicken Tikka Masala often begins with chicken that is marinated in yogurt and spices, then cooked in a tandoor oven. The chicken is then combined with ingredients like, tomato sauce, garlic, ginger and coconut milk/cream. And, it's usually served with basmati rice. 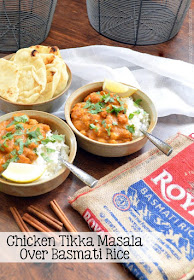 Since I do not own a tandoor oven (and I'm pretty sure that most of you don't either), I decided to simplify the recipe using one large pot right on the stove top. My recipe begins by slightly cooking chunks of boneless chicken in a little oil. Next, some onions, garlic and ginger get stirred in. I, then, add the spices in so that they get a chance to slightly toast in the oil prior to proceeding with the recipe. I like the inclusion of chickpeas, but this is completely optional. Tomato puree is added as the chicken finishes cooking. The mixture gets finished with some heavy cream, plain yogurt or full-fat coconut milk. (Any of the three worked well in my testing of this recipe, but I did prefer using the coconut milk.)

Serve this vibrant, beautiful chicken over a bed of basmati rice (easily found in the rice section of most supermarkets these days) and garnish with fresh cilantro. (I prefer everything doused with a squeeze of lemon, too.)

Serving this with naan bread (an Indian flatbread found pretty easily in the bakery section at your supermarket) is almost a requirement. The bread is used to scoop up the chicken and to dip into the sauce as you make your way through this outstanding dish.

AUTHOR'S NOTE: I have made several versions of Tikka Masala as I have researched the dish and recipe tested during the development of this recipe. I had success converting this to a vegetarian dish solely using canned, drained chickpeas or with using cubed, roasted butternut squash. So, there is some leeway in the recipe if you'd like to make it a vegetarian one. I have, also, read that cauliflower florets can be a good substitute for meat in this dish.

This is a hearty, comforting soup laden with pillow-y potato gnocchi, tender chunks of chicken, fresh spinach and shredded carrots. The broth is rich, creamy and ultra decadent.  This recipe is based off of a popular soup at Olive Garden. Making it at home is simple and satisfying. {Plus, you'll probably end up with leftovers ... and that's always a good thing when it comes to soup.} 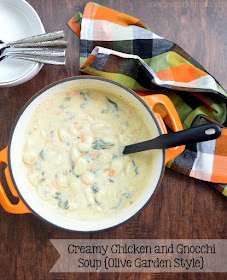 If you're not familiar with gnocchi, they are Italian-style mini dumplings made from cooked potatoes and flour. You can find a plethora of recipes online if you'd like to make you own, but pre-made gnocchi are easily found in most grocery stores these days. Buying them ready-to-use is a total timesaver and there are some pretty good quality ones out there from which to choose.

Typically, packages of gnocchi can be located in the dry pasta aisle. But, gnocchi can sometimes be found frozen and even fresh at specialty markets.

In my household, we prefer this soup pretty thick. If you find that you'd like it a bit thinner, just stir in some additional chicken broth {or even hot water} at the end of cooking.