I've been eating a good deal less meat and embracing more of a plant-based diet in recent months. I've not necessarily went all-out vegetarian, but I don't eat much meat on a regular basis. So, I've begun to get more and more creative with swapping in veggies, grains or the like for meat in my favorite dishes lately. (I've recently fallen in love with lentils in place of ground beef in Sloppy Joe Sandwiches, for example.) Since I adore the flavors of Buffalo chicken, I thought I'd take a run at modifying the standard utilizing a little creativity involving cauliflower. 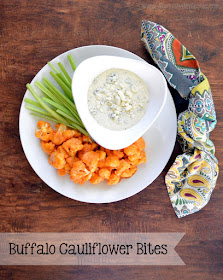 The verdict: I'm like, totally addicted. I could not shovel these little cauliflower bites into my mouth fast enough while I was testing this recipe. I, honestly, did not feel as if I were missing out on anything. In fact, I pretty much prefer this recipe now over using chicken.

The buttery, perfectly-spicy wing sauce is right there in the forefront of each bite followed by the cool relief of creamy blue cheese dressing. And, of course these have to be served with crisp, refreshing celery sticks ... following suit in honor of the original.

I will say that because these bites are baked and not fried, don't expect as crisp of an outer texture on the cauliflower pieces as you're probably used to with Buffalo wings. (I'm sure these could be deep-fried once battered if you're so inclined.) And, although it does take ten minutes or so to dip each little floret into the batter individually before baking, this recipe is a very simple one and comes together quite easily.

My mother made Morning Glory Muffins all during my childhood. I didn't care for them much when I was young, but came to totally love them by the time that I reached my teens. They fueled me through Saturday volleyball tournaments, road trips with friends and shifts working at our local grocery store. They are hearty, hefty, healthful and downright delicious muffins that hold a special place in my heart. 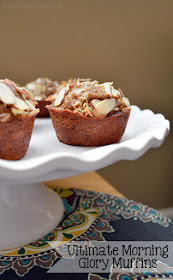 I shared my mother's version on the blog a few years ago. And, while those are fabulous in their own right, I have come to prefer this version these days. The recipes aren't incredibly different, but these do have the inclusion of crushed pineapple (which adds a ton of moisture and additional flavor to the muffins) and I've made a few other changes that I think make these the Ultimate Morning Glory Muffins.

These muffins are loaded with a bounty of ingredients like, grated carrots, chopped apples, shredded coconut, dried fruit, crushed pineapple, grated zucchini and lots of flavor-boosting spices. The ingredient list may seem long, but the majority of the items are pantry staples that most of us tend to keep on hand. And, the ingredients that you may need to purchase are typically pretty inexpensive ones. You get a lot of "bang for your buck" with these muffins as they are super filling. Just one muffin usually does a great job of really keeping the belly full in between meals or stepping up to the plate as a grab-and-go breakfast option. They freeze incredibly well (I think they are best eaten chilled, by the way), so making a large batch to keep in the freezer throughout the week is so handy.