Hello, lovely readers. I just had to take a break from our home remodel projects that have had me on somewhat of a blogging hiatus as of late to share with you this delectable pulled pork recipe. Seriously. The family is so, so into this rockin' pulled pork sandwich recipe right now. (I'm being asked to make it yet again this weekend.) 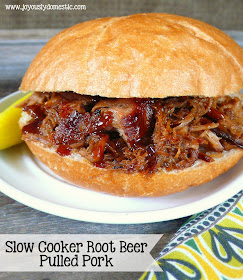 I don't typically allow the kids to drink much soda unless we're out to dinner somewhere or it's a special occasion. And, I'm pretty much a strict water and iced tea drinker. I do buy pop, however, off and on for the hubby to take along to work. I had one lone can of root beer hiding in the back of the fridge that he hadn't drank, so I decided to put it to use making pulled pork. 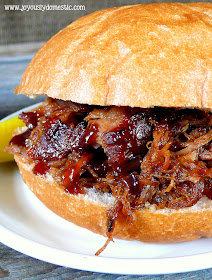 I had recently tried out a new barbeque sauce recipe (recipe at bottom of post) that I've fallen in love with. It is perfect for this recipe. You can simply use your favorite store-bought barbeque sauce (make sure it is a good-quality one), but I so, so encourage you to whip up the homemade version below. It's a dump-everything-into-one-pot kind of recipe and is super easy.

Whether you're looking for something to feed the kiddos as they're heading out the door on a busy school morning or you're wanting something special for a weekend brunch, this collection of breakfast recipes is sure to bring some pizzazz to your morning meals. From overnight slow cooker oatmeal to an all-in-one breakfast casserole, you're sure to find some breakfast inspiration here. 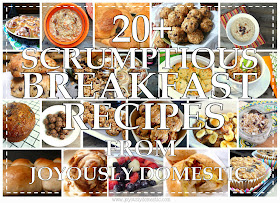 I have been on a hiatus (of sorts) from blogging any new recipes for a couple of months while we're remodeling a house that we just took possession of in July. (Are we close to completion? Thank you for asking. But, nope. Not even close. We're getting there, though.) We've been up to our eyeballs in cabinet staining, drywall work, mudding and such ... all those super-de-duper fun things that come along with most remodeling adventures. 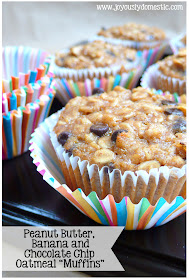 I have barely been cooking or baking from-scratch recently. (I know - gasp.) Our new house is just a few miles from where we currently live and we're not moving in until most of the renovations are done. So, we've been at the new house working during our "free" time which has meant that my hubby and kids have been mostly living on take-out, pizza, granola bars and string cheese. (I wish I were kidding.)

This past weekend, however, I couldn't take it anymore. I was dying to get into the kitchen - even if it meant giving up a couple hours of working at the new place. So, I made a big pot of my Cheesy Potato Soup and kept it warm in my slow cooker to transport over to the new house. (Nothing says gourmet, by the way, like soup served in Styrofoam cups and eaten with plastic spoons.) 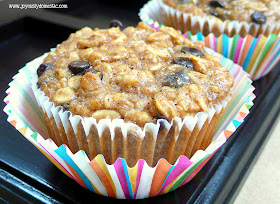 And, these scrumptious "muffins" were made ... and quickly devoured.

These are not quite actually muffins in the true sense of the word - they are chewier and a bit denser than traditional banana muffins. (Having no flour in the mix makes them a little different than muffins, as well.) Regardless, they are darn yummy and are great on the go! They actually remind me of Quaker Oatmeal To Go Breakfast Bars - if you've ever had those.

Who doesn't love the combination of chocolate, peanut butter and banana? They're made with stuff most of us usually have on hand and they're ready to pop in the oven in just a matter of minutes. They'll carry you through the morning and are, also, great for after school snacking.