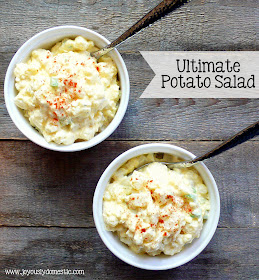 I'm severely and unapologetically picky about 'tater salad. I want nothing to do with any that comes close to resembling the kind found lurking behind the glass at most deli counters or the kind in those plastic pails next to the rotisserie chicken display at the supermarket. You know the ones. They are often slimy and heavily laden with pimentos.

And, I don't care for potato salad made with sweet relish or sweet pickles. Also, I cringe when the potatoes are not cooked long enough. And, I like the potatoes cut into itty, bitty cubes. Furthermore, I don't understand the logic behind boiled potatoes simply coated with a little mayo and mustard (a.k.a. bland potato salad ). I cherish a potato salad that is complex in flavor even though it is considered a simple side dish. It has to have the right vinegar-to-sugar ratio in the mix as it's all about balance to me. When everything comes together as it should, it's a beautiful (and scrumptious) thing!

Many friends and family members have requested my recipe through the years. The problem has always been that I'd never really measured anything. I just eye-balled everything as I went along. But, I have spent a lot of time recently working on nailing down the precise measurements and writing up an actual recipe for my tried-and-true potato salad. So, now I'm finally able to share it here with you.

There are a couple of key steps that I think really help make this recipe a true winner. Drizzling some vinegar over the potatoes while they are steaming hot (right after draining) is one of those key steps. Don't skip it. It makes a world of difference. And, mixing together the dressing with the potatoes, onions, celery and eggs while the potatoes are still warm is another key component to this recipe. The result is a super creamy, you'll-think-you-died-and-went-to-heaven potato salad that is sure to make you the rock star at your next summer party.

Place the cubed potatoes in a large pot. Cover with cold water. Bring to a boil over high heat, then reduce heat to medium. Cook potatoes until they are soft, but not entirely mushy. Drain water off using a colander. Spread potatoes out in an even layer onto a large baking sheet. Drizzle the hot potatoes with 3 tablespoons of vinegar. Sprinkle on 1/2 tablespoon of salt and 1 teaspoon pepper. Allow potatoes to slightly cool while you prep the remaining components of the recipe.

In a large mixing bowl, add the eggs, onion and celery. Set aside.

In a medium mixing bowl, combine the ingredients for the dressing using a whisk. Blend until smooth.

Once potatoes have cooled slightly for about ten minutes, add them into the large bowl containing the eggs, onion and celery. Pour the dressing over the potatoes. Stir gently until everything is well-combined and coated.

Store in an airtight container until time of service. Best if used within three days.

Additional paprika can be sprinkled on top for color if desired.