My family has a love affair with cinnamon rolls. We have my Ultimate Overnight Cinnamon Rolls every Christmas morning (and admittedly many other mornings throughout the year) and we've, also, come to love my Cream Cheese Cinnamon Rolls. Using berries in cinnamon rolls is something rather new to me, but this recipe has made me a true believer in the "amazing-ness" of berries in sweet rolls. 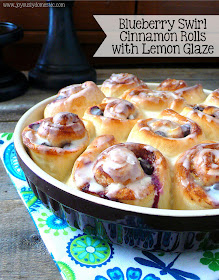 I choose blueberries, but I'm sure that other berries would be just as divine. (I'm thinking frozen cherries next time actually.)  In doing research for this post, I read many times that using frozen blueberries is important. Fresh blueberries apparently don't give up as much of their juices during the baking process.

Blueberries and lemon are a match made in heaven in my world. So I, of course, incorporated lemon into the glaze. The result was nothing short of heavenly.

My recipe uses frozen bread dough as a shortcut. So, the prep for these rolls is rather easy. And, these can even be made the night before and baked off in the morning for a sweet breakfast with little fuss. After arranging the rolls in your baking dish, cover tightly with plastic wrap and store overnight in fridge. Allow to proof in the morning, then bake according to recipe directions.

This is a great meatless dinner option and comes together rather quickly. A good-quality packaged gnocchi is a real time saver in this recipe. I love that this is a stock-based Parmesan sauce. (Trust me - you'll never miss the heavy cream.) Bella Sun Luci sun-dried tomatoes from Mooney Farms lend chewiness and a subtle zip that really compliments the dish. 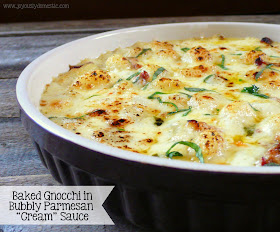 Served with a salad and maybe a loaf of crusty bread, this baked gnocchi makes a great weeknight dinner that the whole family is sure to enjoy.

Whew! That title is a mouthful! Nevertheless, you'll be happy as all get out to have a mouthful (and then some) of this pie! It was a new creation for me that I made for my son's twelfth birthday earlier this week. We'll be having his big party this weekend, but I wanted to make him a special dessert on his actual birthday. He's not a big fan of cake, so I knew I wanted something a bit different. 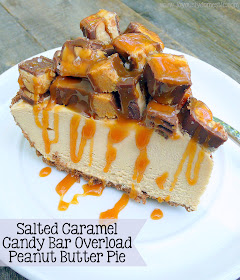 Enter this over-the-top frozen peanut butter pie that I piled high with chopped Snickers and Reese's Peanut Butter Cups, then drizzled with salted caramel sauce. It's not a super traditional peanut butter pie that is usually pudding-based. It's a tad bit thicker and more dense. And, the addition of cream cheese gives it a little tang and helps cut through the sweetness. I guess it could be considered a peanut butter cheesecake, but doesn't have to be baked and isn't quite as heavy. 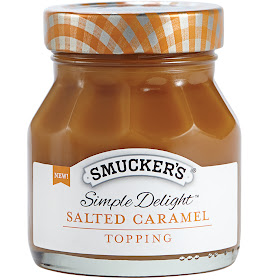 I cheated took some help from the store by utilizing an already-made chocolate pie crust. However, you could make your own if you want by combining a package of pulsed chocolate sandwich cookies with a few tablespoons of melted butter. Just press the mixture into a pie plate. Most any type of candy bar would work here - it's purely about preference. I used something new from Smucker's in this recipe - their Simple Delight Salted Caramel. I love this stuff! You'll be tempted to gobble it up by the spoonful - it's that fabulous! It's a bit thicker than traditional store-bought caramel sauce so it works well for topping desserts.
No comments:
Share 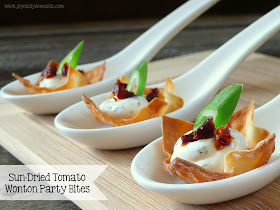 It's no secret here on JD that I adore using sun-dried tomatoes in my cooking whenever I can. So, I was thrilled when Mooney Farms offered to send me a shipment of several of their fabulous Bella Sun Luci sun-dried tomato products a couple of weeks ago. 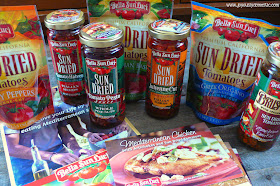 I've been experimenting with their different varieties in my cooking recently and hope to have more recipes to post in the near future, but I wanted to share this simple take on a previously posted JD recipe (my Fresh Veggie Pizza Wonton Cups). For this version, I utilized a similar cream cheese base recipe, but made these into mini wonton cups. I crowned the tops with chopped sun-dried tomatoes and scallions.

These mini appetizers are quite simple and uncomplicated, yet pack a major flavor punch. These are great for parties since almost all of the prep work can be done in advance (prep ahead instructions can be found at bottom of post). Guests seem to love wonton cup appetizers, so these just may be the perfect flavorful bites to serve at your next gathering.

I have requested a kitchen blow torch from my hubby and kids for a good three years for my birthday and Christmas. I adore crème brûlée and always order it if a restaurant offers it while I'm out for dinner. It is seriously my absolute favorite dessert on the planet. 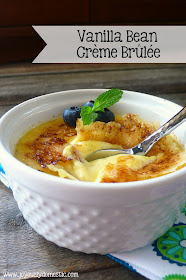 For Mother's Day this year, they finally got me a blow torch so that I could make crème brûlée at home. I had made it many years ago, but had to use my oven broiler to attempt to achieve that crackled sugar top. Frankly, I just always thought that a blow torch would make the process much more fun and me a more legit maker of crème brûlée. (I know - that sounds so corny.)

Crème brûlée, also, happens to be one of my kids' favorite desserts. We usually just order one and share it while we're out to eat, so you can easily conclude that I only get two or three bites. (The moms out there know what I'm talking about.) We were all looking forward to making this dessert at home so that we could each have our own! This recipe yields six individual servings. 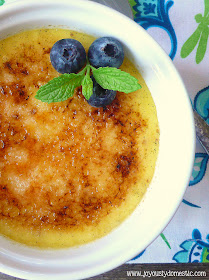 The hardest part of the recipe is waiting for the custard to completely chill before topping it with sugar, torching the heck of it and cracking it open with a spoon.

Earlier this year, I introduced a new monthly feature here on Joyously Domestic - Blogger Spotlight. Last month, I featured Tux from Brooklyn Homemaker. This month, I'm thrilled to be featuring Michelle from Counting Willows. I came in contact with Michelle through our mutual guest posts on another site. She is one sweet lady and seems to share many of the same values as I do when it comes to family, home and life in general. Her blog is a beautiful blend of home organization ideas, cleaning tips, recipe ideas and DIY fun. She, also, shares stories from her busy life as a mom and wife that will inspire us all to take time to enjoy the simple, meaningful things in our often-chaotic, crazy lives.

After lots of requests and a little procrastination, I've finally bit the bullet and joined Instagram. I'm just getting started, so the posts aren't numerous just yet. But, I'll be sharing some behind-the-scenes stuff, content that isn't always shared here on the blog, a peek every now and then of the family and lots more as we go along. So, come follow along and let's have some fun, friends.

Today I'm featuring a FREE printable that is perfect for capturing kids' thoughts about MOM this Mother's Day. Whether for at-home use, school classroom use or Sunday School use, this quick questionnaire is a simple, yet memorable way for kids to show moms everywhere just how much they love them! It is certainly something mom will cherish for years to come. 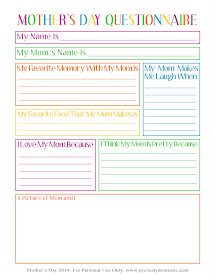 Simply right-click the printable and save to your computer. Print as a full page in high-resolution.

This Luscious Citrus Sugar Scrub is super simple to whip up and makes a great gift. I was floored when I realized I could make sugar body scrub so easily and inexpensively at home. 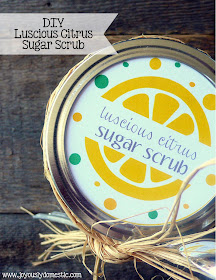 This scrub is a super luxurious treat for dry, weathered skin. If you prefer a more-coarse scrub, you can alter the amount of sugar you use to adjust the consistency. Some may prefer it rather oily and choose to use less sugar while some may enjoy it more-coarse. It's all about your preference ... just add more sugar or oil until you reach the consistency you like. 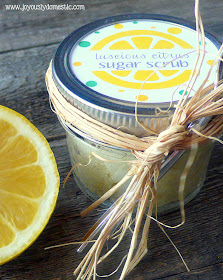 I am providing the printable I used for my labels (see bottom of post). They can be used to tie onto the containers with raffia or ribbon. Or, you can label the tops of your jars with the circle labels if the size is right. (Just right-click the printable to save to your computer, then print as a full page in high-resolution.)

A small spoon or scoop can be attached to the container with ribbon, if desired. I would encourage use of some type of spoon or similar item so that wet fingers aren't used to scoop out the product. (Getting water into the scrub can cause bacteria growth over time.) I would, also, discourage you from storing the container directly in the shower or tub. Keep in a dry place and scoop out what you need at time of use. (It's a good idea to pass this info on to the gift recipient if gifting.)

Vitamin E Oil is used in the "recipe" to help act as a natural preservative. The addition of sea salt can help, too, if desired.

It was a busy month here on Joyously Domestic. After struggling to post actively during March due to a crazy wave of illness that tore through our household, I had lots to get done in April. I'd love for you to join me as I take a look back on the blog happenings over the past month. 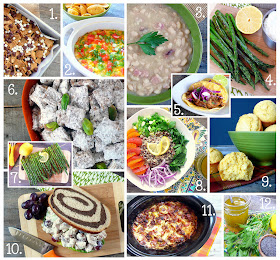 It's a fact that so many of us wondered if we'd ever make it to warm temps and yards not covered in several feet of snow this year. It was quite the brutal winter! But, spring has sprung and if you're anything like me, you're craving those delicious summer recipes. While I still love those comforting slow cooker recipes year-round, I'm so ready for backyard cook-outs and eating a much lighter fare.

I've put together a round-up of some great summertime recipes from right here on Joyously Domestic to inspire you - fabulous pasta salads, fresh veggie appetizers, refreshing icebox treats and cool, creamy dips. So, whether you're inspired to try a few of these recipes to get ya in the mood now for sunshine and flip flips OR you want to bookmark (or pin) this list for the upcoming months, it is my hope that you'll find a few recipes that'll become family favorites.
No comments:
Share
‹
›
Home
View web version