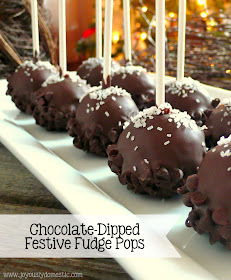 This is a little story about a recipe in the kitchen going from failure to fabulous.  We've all had those "flops" when we're baking or cooking - the ones that sometimes bring tears to our eyes (and bruises to our culinary egos).  Those moments when we realize that we're staring at a disaster-of-a-result sitting on the counter.  We're sure that the garbage is the destination for our failure, but we rack our brains on how to salvage this mess-of-a-recipe that we've created.

Is it too burnt?  What if I scrape off the bad part(s)?  Can I transform this into something else?

Well, my dear mother, Dawn, had a new recipe to try for chocolate fudge.  It was on one of those recipe cards that you sometimes see on display at the grocery store.  Now know that my mother is a fabulous cook and baker - and a stickler for following recipes precisely.  She made the fudge recipe, but it never quite set up correctly.  The flavor was outstanding, however.  But, once "set," it was still a bit too um, gooey.  She had been in the midst of a baking frenzy - preparing a huge holiday platter of goodies to take to her company Christmas party.  She refused to use this fudge for her platter since its appearance was well, less-than-stellar.

She was ready to pitch the fudge into the trash.  But, who just happened to stop by?  Yours truly.

That fudge and I had a date with destiny.  I knew exactly what to do with it.

Thus, these Chocolate Fudge Pops were born.  Now, I was concerned that another fudge recipe wouldn't work like this one did for making fudge pops.  So, I whipped up a batch of a tried-and-true chocolate fudge recipe that I've used (it is from Nestle and can be found HERE.)

You can add in nuts or omit them.  Dried fruit can be added in, too.  (My mother's fudge had dried cherries in it.)  You could make it studded with crushed candy canes for the holidays as I did for the second batch I tried this method with.  These fudge pops would probably work fabulously with peanut butter, eggnog or vanilla fudge, as well.

The number of servings will depend on the fudge recipe you use and the size you make the balls.  Mine yielded around 20 fudge pops.

One basic fudge recipe (mine is made in an eight-inch square pan)
10 ounces melting chocolate
1 tablespoon vegetable oil (optional, but gives a sheen to the chocolate once it dries)
Any sprinkles, crushed candy canes, mini chocolate chips, nuts, etc. for embellishing fudge pops
Lollipop sticks

Once you have made your fudge and allowed it to cool enough to handle, roll it into balls roughly the size of traditional meatballs.  Place a lollipop stick into the top of each ball.  Refrigerator for about fifteen minutes or until fudge is completely chilled.

Melt the chocolate in the microwave (a glass bowl works best).  Heat in thirty-second intervals - stirring between each interval - until chocolate is fully melted and smooth.  Stir in the vegetable oil.

Allow to set up on a parchment paper-lined baking sheet.  Store in the refrigerator or in a dark, cool place.