Split Pea Soup. Yay or nay? I am a huge fan. But, I don't make this soup often because I have a couple of children who would rather be forced into a ten hour marathon of household chores than eat a soup with peas as the main ingredient. {My daughter asked if I was actually going to post this on my blog because she was so grossed out by this soup.} 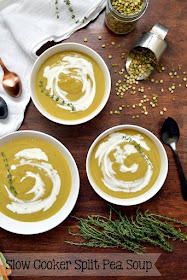 I adore the simplicity of the ingredients, how inexpensive this soup is to make and I like how wonderful this soup cooks up using the slow cooker. {My loyal readers are aware of my love affair with my slow cooker.}

People do seem to either really love split pea soup or they absolutely despise it. For those who adore it, this recipe is a real winner.

This soup can be made using a chunk of leftover ham, a hambone, ham hocks or salt pork. {It's a great soup to make after you've had a big ham dinner.} If using salt pork that is sliced, use some kitchen string to tie it up so that it doesn't all come apart during cooking.

Add all ingredients except for cream into a 5 - 6 quart slow cooker. {Stock addition not shown below.} 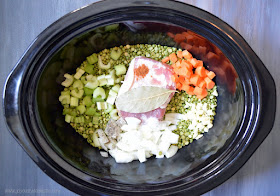 Remove ham chunk, ham bone, salt pork or ham hocks. {If there's meat that you'd like to put back into the soup, shred or chop it into small pieces and add it back in once soup has been blended.}

Use an immersion blender right in the slow cooker to blend the soup. Blend as little or much as desired. Alternatively, you can blend the soup in a blender by working in small batches {only fill the blender half full each time and allow ventilation on the lid}.

Check for seasoning and adjust accordingly. Return ham, as desired, back into the soup.

Drizzle each bowl of soup with heavy cream at time of service. 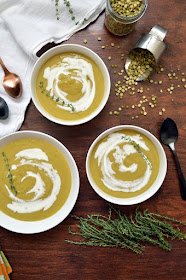 09/28/17: Updated photos and made clarifications to recipe/post.