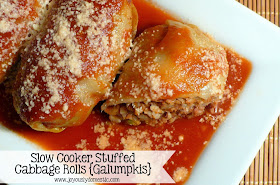 I grew up eating cabbage rolls (my step-father's side of the family was Polish), but never liked the cabbage part.  The filling rocked, but I hated cooked cabbage.

My husband, however, adores cabbage rolls - every single part of them.  His mother usually makes a huge batch about once a year and since she lives next door, she calls my hubby over to grab a big plate of them to take home.  Since today is our anniversary, I made some in his honor for our Sunday dinner this past weekend.  (How "romantical," right?)

Cooking the cabbage rolls in the slow cooker keeps them super moist and really allows time for all of the flavors to meld together.  I use the same filling for my stuffed green peppers and those can be done in the slow cooker, too.

You might be assuming that I am posting about my blog anniversary.  Nope.  That was back in June.
September 30 (the start of this giveaway) is actually the anniversary of the date I met my now-husband ... eighteen years ago.  We were married in the month of July four years later, but we seem to celebrate the anniversary of the day our paths in life first crossed more than we seem to celebrate our wedding anniversary.
There's a funny and unique little story about our meeting that I thought I'd share.
We met when I called the wrong number.  (True story.)  He answered.  We ended up talking for a bit.  I blurted out that I was having a little shindig later with some friends at my house.  Did he wanna come?
He could have been a serial killer.  He could have been psycho.  He could have had three eyeballs.  He could have kidnapped me that night and held me for ransom.  (My mother says to this day that I was crazy.)
But, guess what?  He was a super nice, good-looking guy.  It turned out that his family knew my step-father's family.  His folks lived right around the corner from mine.
He hung out at my house that evening for a few hours.  After he went home, we talked on the phone all through the night until the batteries on our cordless house phones were dying.
We have been together ever since that fall day in 1995.  Fate.  Destiny.  Call it what you'd like.  I love that the way our story together began involves a crazy, sweet story that we tell our kids and will one day tell our grandkids. 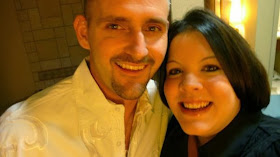 So, in honor of our special day, I'm launching another Amazon Gift Card Giveaway.  You'll find the details below. 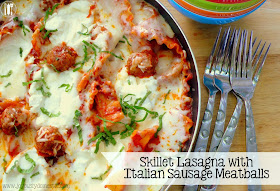 Don't you love laboring for an hour (or more) assembling traditional pan lasagna and then waiting for another hour (or more) for it to bake?  Me neither.  (And, we won't even talk about all those dishes!)

Whip up this skillet lasagna in a fraction of the time while still enjoying all of the flavors of pan lasagna.  There - problem solved. 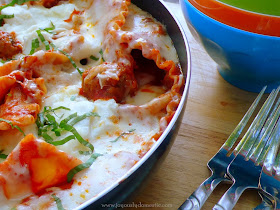 Yes, this recipe truly uses only one pan.  (No need to even pre-boil the pasta.)  Isn't that fabulous?

I chose to shape the Italian sausage into mini meatballs, but you could totally just break the sausage up and cook it as you normally would for a meat sauce.  (You could even use ground beef if you prefer.)  I utilize a good-quality marinara in this recipe, but if you have some canned or frozen from-scratch sauce on hand, go for it and use that!

This is such a simple dinner recipe.  It does take a little patience during the baking time, but the prep and assembly of this dish is incredibly quick (and easy). It's perfect for a weekend meal ... especially during the cooler months when you don't mind the oven being on for a bit.  And, this is one of those dishes that will fill your home with fabulous aromas during cooking. 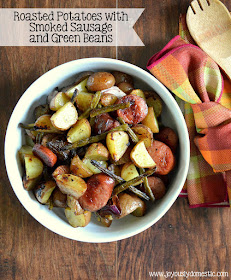 I usually prefer green beans crisp-tender, but I really enjoy the way the beans (and onions) gets caramelized and deeply roasted in this dish.  I add in a little fresh herbs in addition to the Italian dressing called for in the recipe, but it is still amazing without the herbs if you don't happen to have them on hand.  (The sausage and Italian dressing do a wonderful job of seasoning everything on their own - the herbs just add a little something special.)

To find out the nutritional info for this recipe, you can visit my post of this dish on My Recipe Magic.  Click the "Nutrition" tab at the top of the post.

I have been eating BLT Soup at a beautiful bistro-style restaurant in a town not too far from our home for many years.  I order it there without fail every time we visit.  It sounded so strange to me before trying it there for the first time.  Who puts iceberg lettuce in soup?  (They do. And, it rocks.) I spent quite a bit of time researching online various BLT Soup recipes recently, then followed that by testing some of the recipes that I came across. Through trial and error, I believe that I have arrived at the ultimate BLT Soup recipe. 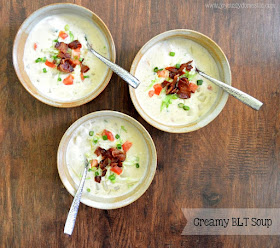 When you dig into this soup, you really do feel like you are eating a BLT sandwich, but in soup form. (Does that make sense?) All the flavors are there.  Crusty bread on the side for dipping is highly recommended, but the soup is great on its own, as well. It is comfort food times a million. Think of the marriage of a BLT Sandwich to Creamy Potato Soup.

Indulgent. And, so totally worth every bite. 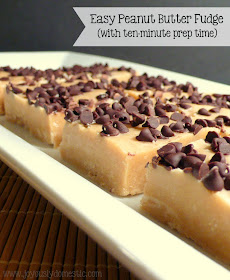 If the mood strikes and you find yourself craving something sweet and peanut buttery, this recipe is for you.  You won't believe how quick and easy it is to whip up peanut butter fudge using this recipe.

Seriously, I was in and out of the kitchen in less than ten minutes making this.  And, the recipe requires just a few simple ingredients that most of us keep on hand.

I was inspired to try this recipe after seeing it posted on my friend's Facebook page.  (Thanks, Leah!)

I chose to "gild the lily" by adding some mini chocolate chips to the top of the fudge, but that is pure preference and totally optional. 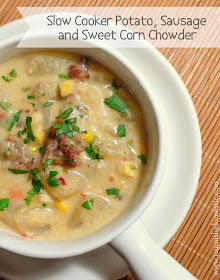 Friends of Joyously Domestic know that I love my slow cooker.  It is - without a doubt - my best friend in the kitchen.  As a mom of three kids still at home, it seems that we are constantly on the go and live life on a pretty busy schedule - especially during the school year.  With the kids starting school today (ninth, fifth and first grades), I'm sure this year will be no exception!

Preparing wholesome, from-scratch meals at home while keeping up with sports, band, theater and the like can be tricky, at times.  That's where my slow cooker comes in.  I utilize it probably three-to-four times a week.  We love soups, stews and chowders, so this recipe is a favorite.  It is a loose adaptation of the Chipotle Chicken and Corn Chowder recipe that I shared here on the blog back in January.

I've chosen to use ground Italian sausage here, but you could use bacon, ham or leave the chowder meat-free.  I throw in a diced chipotle pepper (they come canned in adobo sauce).  My family doesn't care for overly spicy food, but using just one pepper gives this chowder some great additional flavor and a hint of smokiness.  Below is how they come in my grocery store.  I can easily find them at most markets.  Since they are strong in flavor and only one is needed for this recipe, you can save the remaining peppers and sauce for another use.  (I freeze a pepper or two in snack-size plastic bags for single-serve portions when needed in the future.) 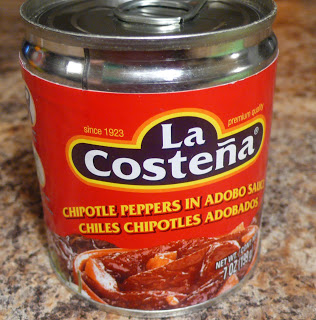 For nutritional value information of this recipe, visit my post of this recipe on My Recipe Magic.  Click the "Nutrition" tab at the top of the post there.