I'm sharing this basic recipe for Slow Cooker Mexican Shredded Pork with you today as a starting point for another recipe that I'll be sharing soon - one that utilizes the pork in a super yummy way. This pork, however, can be used for any type of tacos, taquitos, enchiladas or burritos. It's kind of a basic recipe that I often use in addition to my Green Chili and Lime Pulled Pork for tacos and such. 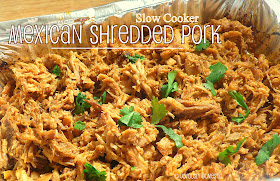 Since this makes way more shredded pork than I use for one dinner or dish, I often freeze some of it after it is done in the slow cooker for later use.  I freeze mine in disposable aluminum containers.  When I want to use it, I thaw it out in the fridge overnight and place the whole disposable container right into my slow cooker to heat the pork back up.  (You can reheat it in a pan on the stove top, as well.)

Cut pork roast into large chunks. Sprinkle on the chili powder, cumin, oregano, paprika, red pepper flakes, cinnamon, salt and black pepper. Rub the spices all over all of the pork pieces. Place in the slow cooker. 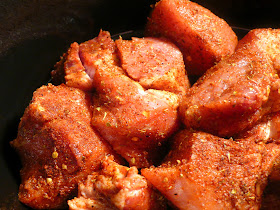 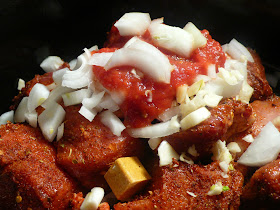 Cover and cook on low for 5 - 6 hours (or until pork is super tender and shreds easily).  Do not discard any cooking liquid!  Shred pork with two forks and return to the cooking liquid.  (If you don't have a lot of cooking liquid left, add in a little water or stock so that the meat remains moist.)

NOTE:  Your cooking time may vary depending on your own slow cooker, the exact size of your pork pieces and the quality of the meat you're using.

Taste and adjust seasoning as needed.  I often add in a little more chili powder, cumin or salt.

Use immediately or refrigerate/freeze for later use.

Use in any Mexican-style recipe that you prefer.