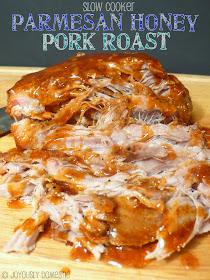 There's a funny story that goes along with this recipe and post.  I had just dropped a pork roast (seasoned with only salt, pepper and a little garlic) into the slow cooker when I decided to switch gears and make it a Parmesan Honey Pork Roast.

I had just sat down at the computer after starting my boring, plain roast in the slow cooker (I was drawing a blank and lacked any real motivation to do more than lightly season the piggy roast originally).  The first thing I came across when I plopped in front of my laptop was a comment posted on my No-Bake Energy Bites post by Lillian of My Recipe Journey.  I jogged over to her blog and came across her post about this pork roast.  It looked and sounded divine.  So, back into the kitchen I ran.  The "sauce" for the recipe comes together in a minute or two, so I mixed it up and poured it over the roast.

Several hours later ... pork heaven!  Seriously ... I'm sure that I heard church bells ring and angels sing!  The sauce has just the right balance of saltiness, sweetness and tang. 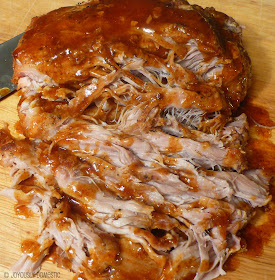 It was a huge hit with the family, too.  (Mr. Joyously Domestic declared that it was one of the best things I've made in awhile.)  It's funny how things just fall into place sometimes ... this recipe will definitely be made again in this household!  And, I urge you to try it in yours, too!


Directions:
NOTE:  The original recipe did not call for the roast to be seared first on the stove-top in a little oil, but I had already done so and it turned out great.  So, I think it's up to you.
Spray slow cooker with non-stick cooking spray. Place roast in slow cooker.
In a small bowl, combine the cheese, honey, soy sauce, basil, garlic, oil and salt.  (I found the mixture to be a little too thick to pour over the roast [as instructed in the next step of the recipe], so I added in a tad bit of water to the mixture - maybe 1/2 - 1 cup.)
Pour over pork.
Cover and cook on low for 6 - 7 hours or until a meat thermometer reads 160°.
Remove meat to a serving platter and keep warm. (I cover mine with a little foil.)
Skim fat from cooking juices, if needed or desired.  Transfer to a small saucepan.  Bring liquid to a boil.  Combine cornstarch and the 1/2 cup water until smooth.  Gradually stir into pan.  (I found that I did not need all of the cornstarch slurry.)  Bring to a boil.  Cook and stir for 2 minutes or until thickened. Slice roast and serve with gravy.  (I didn't use all of the sauce.) 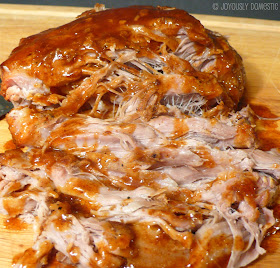 UPDATE 3/4/13:  I have had wonderful feedback about this recipe, but also heard that there can possibly be issues with the sauce getting too dark, burnt or dried out by the end of cooking time.  I did note previously within the directions that I added some water to the sauce (before pouring over roast) because I felt like it was too thick.  Also, some have mentioned that they used shredded Parmesan cheese.  The recipe calls for the powdered kind.  So, make sure you're using the right cheese. I have made this a few different times now.  Twice it was perfect.  Once the sauce was almost burnt (and crumbly) on the top of the roast.  I am thinking that maybe adding the sauce part-way into the cooking of the roast would help this issue.  The roast could get cooking on its own for two or three hours, then pour the sauce over it at that time.  Also, I do think that the cut of meat you use will yield different results ... fat content will alter the moistness/dryness aspect.  If you've tried it, I would love to hear how the recipe turned out for you!