Coney Dogs in the Slow Cooker 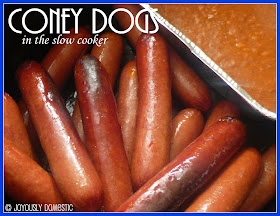 Since it was only going to be a quiet evening at home this past New Year's Eve, I didn't have to really plan much in terms of party-type food.  Our thirteen-year old daughter was going to a friend's for a party and my ten-year old son was having a friend over for the night.  Other than that, it was just our five-year old, my hubby and myself.  (Exciting, huh?)

Honestly, I was looking forward to some time with my husband home for a couple of days and us not having any major commitments or plans.  While so many people party it up over the New Year's holiday, it is usually our "down-time" after the prior week's craziness surrounding Christmas.

My son wanted coney dogs for New Year's Eve while his buddy was over, so I broke out the slow cooker!  We made up a huge batch of homemade french fries and enjoyed some simple grub while we prepared to ring in the new year!

It's almost embarrassing to post this "recipe" since it is such a simple and easy one.  But, it is a great tip for those who have never heard of cooking hot dogs in the slow cooker.  This is a great way to do hot dogs or sausages for a large crowd. They stay hot throughout a party or event as people eat at their leisure.

This is a great idea if you plan to host a Super Bowl party this year, too!  Guests can trickle in and out of the kitchen to make a coney or chili dog all throughout the game!

Start the already-cooked coney sauce or chili in the slow cooker on low about 4 hours before you plan to eat.  I put mine in a small heat-safe dish or disposable aluminum pan.

Drop the hot dogs into the empty portion of the slow cooker (no water needed) about 3 hours before eating.  Adjust the temperature to the high setting.  Hot dogs should be rotated around halfway through cooking so that the outer ones touching the slow cooker don't burn.  The hot dogs or sausages will get nice and brown in spots by cooking in the slow cooker.

After a few hours, turn slow cooker to warm during serving.

NOTE:  I have not tried this method with fresh sausage so I am not sure of the cook time.  I would think that cooking something like, fresh brats for three or four hours on high in the slow cooker would be enough.  But, you'll want to check for doneness and make sure that they are thoroughly cooked through before serving.  I've only followed this method with hot dogs and smoked sausage.

This method works best with a large, oval slow cooker compared to the tall, skinny version.

If you were serving a very large crowd, this could probably be done in a large, electric roasting pan, too!  Just place a large dish of coney sauce or chili in the pan, then add your hot dogs or sausages off to the side in the pan.