This dish is a complete stunner. But, it is just as delicious in taste and flavor as it is in appearance. I was so intrigued when I first saw a version of this recipe on Martha Stewart's website. I am a huge potato fanatic and these just looked glorious! I altered a couple of things in her recipe, but followed her technique and concept. I used some pancetta in my version. (Bacon would work fine, too.) I like that the lower part of the potatoes roast up tender and soft while the edges and tops become beautifully crisp. 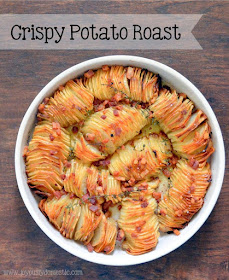 The key to this recipe is getting the potato slices as thin as you can, so prepping the potatoes does take a little time (about fifteen minutes). I recommend using a sharp, thin-bladed knife.  Also, patience is a must as this dish bakes for about two hours total. (It's totally worth it - trust me.) This is a dish that is super impressive-looking and would really wow at a dinner party!

Combine the oil and melted butter in a small dish. Set aside.

Brush a round baking dish (around 9 - 10 inches) with a little of the butter and oil mixture.

Slice the potatoes as thin as possible crosswise - try to keep the potato slices together as you cut each potato.  Arrange potatoes vertically in the baking dish.  Wedge onion or shallot slices throughout potato slices - in about 3 or 4 sections of each potato.  Sprinkle with salt and pepper flakes (use some black pepper if not using red pepper flakes).  Brush with the remaining butter and oil mixture. 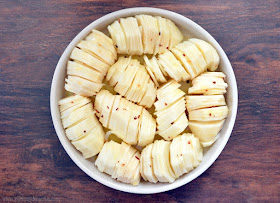 Bake for 1 hour and 25 minutes. Cover loosely with foil during the first thirty minutes of baking. A little of the olive oil/butter from the bottom of the baking dish should be brushed/spooned onto the slices a few times during baking (much like basting a turkey).  Also, a butter knife can be used to separate some of the slices if there are some sticking together too much during baking.

While potatoes are baking, crisp pancetta in a small pan. Remove with a slotted spoon and drain on paper towel. Set aside.

Remove potatoes from oven. Add pancetta by scattering around throughout the potatoes. Lay the thyme sprigs on top of potatoes. 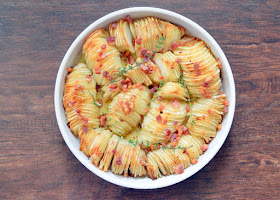 Bake for an additional 35 minutes.  Remove from oven.

Sprinkle on a little more kosher salt.  Serve immediately.  Sour cream is a great accompaniment to the potatoes. 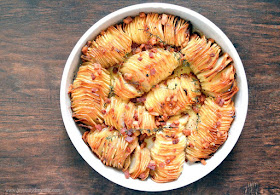