Okay.  I realize that several of my recent posts have included bacon in some form or another. I think it is partly due to the fact that a couple of weeks ago my grocery store had a killer deal (half off!) on thick, center cut bacon.  Of course, I stocked up. 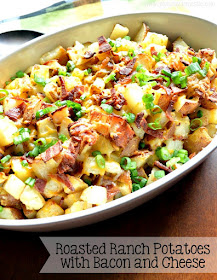 Honestly, however, let's just admit that bacon is just so darn tasty!  There need be no excuse reason to eat it. In fact, last year we traveled from Michigan to Arizona for our son's college graduation.  We took a couple of days to travel into California to go to Legoland and due to our adoration of bacon, we made specific plans to go to Slater's 50/50 (a bacon-lover's paradise of a restaurant that we had seen featured months prior to our trip on a bacon-themed food show).  They grind bacon into their burger meat, offer a maple-bacon milkshake and serve bacon brownies.  It was heaven!

So, when I came across this recipe, it appealed to me in every way. I developed it into something kind of amazing and based on our preferences! It has become a real family favorite and is often even requested by relatives at family gatherings.

Combine (in a large bowl) the ranch dressing, dill, cheese and bacon.  Add in the potatoes.  Sprinkle in a generous pinch of salt and pepper.  Toss to coat potatoes.

Spoon into a greased 9 x 13 baking dish.  Cover with foil.

Bake for 60 minutes.  Stir gently halfway through to get the bottom potatoes rotated to ensure they don't become burnt and to ensure that the middle and top potatoes get a chance to brown.

Bake for an additional 15 minutes, then sprinkle on additional cheese.  Bake a few more minutes or until everything is gooey, browned and bubbly on top.

Serve with scallions sprinkled on top for garnish. 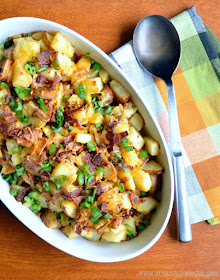 Great with a dollop of sour cream.

NOTE:  The original recipe from which I adapted this one called for jarred real bacon pieces.  I made the recipe using real bacon (about 5 - 6 slices) that I cooked until crisp and then broke into pieces.  Although I am a firm believer that there is never a substitute for real, fresh bacon, I would think that the kind from a jar would be fine (as long as you don't use imitation bacon bits).

~ Follow Joyously Domestic on Facebook for updates on new posts! ~
UPDATE 12/4/12:  This recipe has taken off like wildfire ... with over 300,000 hits (and thousands of pins and shares) in the first month alone after it was posted!  So many of you have provided positive feedback and suggestions for substitutions when it comes to flavors in this recipe!  One great suggestion is to use a ranch dressing that is flavored with chipotle or to use other kinds of creamy dressings.  People are adding in chicken to the dish to make it a more-complete meal.  Also, many of you have changed up the spices and used garlic or other herbs in addition to or in place of the dried dill weed.  What fabulous ideas.  I love that this has inspired so many to mix it up and make it their own!  Thank you for your comments and emails!﻿  Keep 'em coming!  If you've tried the recipe, I'd love to hear how you liked it.